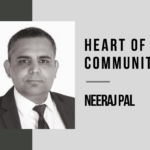 Neeraj Pal is a new Canadian lawyer who practices corporate commercial, real estate and civil litigation law. His focus is on easing the burdens of his clients and helping with complex legal matters.

Neeraj Pal was born and raised in India. Before coming to Canada in 2017, Neeraj was a lawyer in India for 16 years. He worked as in-house counsel for ESPN, Vodafone, Viacom and Times Network in India. In Canada, he is a sole practitioner that focuses on corporate commercial, real estate and civil litigation.

Neeraj didn’t always want to be a lawyer. There were a few lawyers and judges in his extended family and to his limited child perception, they led rather boring lives. “I wanted to be someone who was free-spirited, doing their own thing,” he said. The trouble was, he wasn’t quite sure what it was that he wanted to do. No matter, he thought. He would start the track to become a lawyer to keep his parents happy and to give himself time to figure out where his true passion lay.  He took the law school entrance exam, got into law school and realized with a mild shock that he loved it. Soon law became his passion. “I realized how amazing it is to search [for] new things, do research…fight a case…get a confirmatory result… And I was good at it,” he said with a twinkle in his eye.

At one point in law school he had the opportunity to argue a case in a simulated court environment. He prepared his case law and his arguments, practiced his delivery. During his presentation, he was so wrapped up in his arguments that he didn’t realize he had gone beyond the allotted time. It didn’t seem to matter though, because when he was finished, his classmates were on their feet and showering him with applause. “[It was] such an amazing feeling,” he said. “I thought, if I can do it here, maybe I can do it somewhere else.”

Neeraj was called to the bar in India in 2001. He worked as a junior lawyer assisting a senior counselor in research, court appearances, documenting reviews and time management. During his next job at ESPN, he decided to do his Master in Laws in London, England. After his Masters, he was rehired by ESPN. Later on, he got an opportunity to be part of the Viacom’s dynamic legal team. Before heading to Canada, he was taking care of the legal and regulatory functions at Times Network, where he was dealing with serious techno-commercial agreements for the online and broadcast media business. Neeraj enjoyed the work and the team-based environment. When he and his family came to Canada in 2017, he contemplated returning to the same type of in-house environment but ultimately decided it was time to try starting his own practice, something he had wanted to do for awhile.

Neeraj took his accreditation exams while still in India so that when he arrived in Ontario, he was able to start the process to be licensed. He wrote his Barristers and Solicitors exams, completed his articling with Brampton Legal Community Clinic and was called to the bar in June 2019. He opened Gretis Legal in November 2019.

Out of all the types of law, Neeraj has always been drawn to corporate commercial cases. It’s why he worked as in-house counsel in India. He feels a sense of kinship when many people are working together towards a common goal, to produce a product of the highest quality. And although he no longer works for a large company, he tries to bring that sense of ownership and partnership to the cases he works on with his clients. Real estate is his second area of interest. He finds it’s a way to stay connected to the community, give back to it, and stay in touch with the people within it, which is very important to him.

Third, Neeraj does civil litigation for personal injury claims and accident benefit claims. He finds litigation intriguing because he must stay active and updated on caselaw as it can change overnight. It’s a way to help people with their rights, making sure they get their share of things.

When asked what he’s most proud of, he gave a surprising answer. Neeraj said that the easy answer would be graduating from law school or passing the bar both in India and in Canada. He acknowledged that they are impressive accomplishments and he is proud of those moments, but to him, his proudest achievements are learning to knot his tie, learning how to swim as an adult, immigrating to a new country and starting all over again, and of course learning to drive on the other side of the road. He had to really work hard to overcome his fear (swimming) and years of trained instinct (driving) to succeed, which he did, and he’s beyond proud of those victories.

After deciding to start his own practice, he began looking for an office space. Through a Google search, he found Wolf Law Chambers. He called and made an appointment for a tour. “They were very welcoming, and I was very impressed with the space,” he said. “I have worked most of my professional career in an environment where everybody has their own space but there is room to help each other. I wanted something similar. I never realized it would be available, but I saw [it] here.” When he checked it out, he knew he wanted an office at Wolf Law Chambers for himself. “The infrastructure is good, [there’s] 24/7 access and the coffee is great,” he added with a laugh. He noted that the clients who visited his office were very impressed. They liked the layout and the air of professionalism. The location is also a bonus as it’s pretty central in terms of reaching different parts of the GTA.

As a tenant of Wolf Law Chambers, he’s really impressed with the use of technology and how it’s been incorporated into office use. “They have enabled it to become your personal assistant,” he said. He can get his voice messages by email; he knows when he has mail or a parcel to pick up. He receives faxes electronically, negating the need to physically pick up the fax and then scan it himself. He can book the conference room online. “Technology has been used very positively, which is good because it can bring down efficiency [but not here], here it is used very nicely.” Too often, you don’t realize you need something until the need arises, but time and again, Neeraj has found his needs anticipated and fulfilled before he can voice them.

Short term, Neeraj would like to keep his practice running and keep learning about the Canadian system. Long term, he would like his practice to evolve into a big firm that has lawyers specializing in different areas, and for his practice to be heavily involved in the community. He also wants to create his own Bay Street. He sees a lot of good talent coming from outside Canada that could be utilized. He thinks it would benefit the community and be good opportunities for the incoming lawyers. “Not everyone can go to Bay Street after all, so why not make one right in the heart of my community?” he asked.

At the end of the day, his favourite part of being a lawyer is when he’s able to put a smile on his client’s face. When they’re able to walk out of his office satisfied and smiling, he’s happy. “Whatever it takes to make that happen,” he says, “I will do.” That smile is the best feeling of satisfaction.

If you would like to ease your burdens and smile, give Gretis Legal a call.

← Solo Practitioners – Here’s How to Save 10-Plus Hours Every MonthJulia Munk: Helping You Understand the Law →
WP BASE
Scroll To Top